Barbara and I visited our son in Germany for thirteen days, leaving the U.S. on April 22 and returning May 4, 2013.

We had a great time! Here are photos of a few places we visited. Except for a day trip to Cologne from Wiesbaden (by train) and the three days in Berlin (where we used the S-Bahn and the U-Bahn exclusively), all travel was by car, driven by our son.

Our flight having left America on Monday, April 22, we arrived at about noon on the 23rd. John met us and drove us in his new VW GTI to our hotel in Wiesbaden. 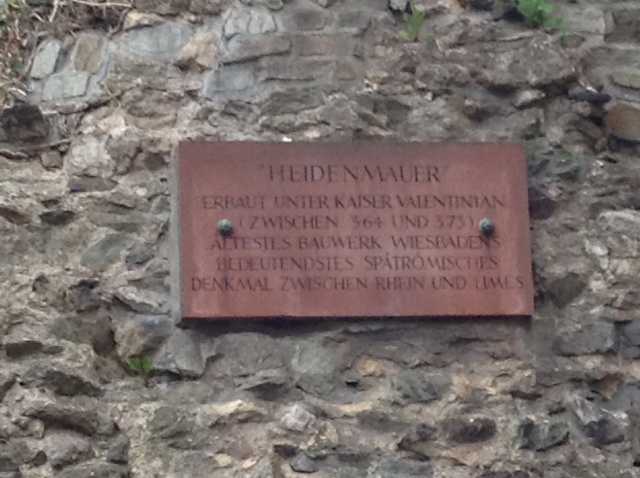 
Cologne Central Station is right next to the Cologne Cathedral--probably the main object of our only inter-city train ride during our visit to Germany.


We walked the streets of Cologne after visiting the cathedral. I ate pork Schnitzel at a restaurant near the cathedral. We tried some (non-alcoholic, of course) Kölscher at the restaurant. The only thing worse than its taste was its smell. We couldn't bring ourselves to drink more than a few sips.

In listening to Pimsleur German CDs, I always wondered what Mineralwasser (mineral water) was. Well, one taste was enough to convince me that I don't like it. (The Germans are crazy about it, by the way.) I learned to request "stilles Wasser" if I wanted "plain" water. (The Germans always asked me if I was certain I wanted stilles Wasser.)

We visited the Lindt Chocolate factory/museum while in Cologne. (They make the round Lindtor chocolates seen in many American grocery stores and gas stations.) The museum was fascinating. It included an actual assembly line--complete with workers taking wrapped chocolate off the line--that made chocolate from start to finish. It was very interesting!

John drove us from Wiesbaden to Würzburg on April 25.


We slept overnight at Würzburg.

It was at Würzburg that we experienced Dönners for the first time. We saw Dönner restaurants in pretty much every city we visited. In fact, we often saw them every block. The closest thing to Dönner's ubiquity was the McDonald's, Pizza Hut, Baskin-Robbins and other fast food restaurants I found in Tokyo in 2000--except that Dönners are far more prevalent. Most of their menu items involve a large (5-6 inches thick, 2-3 feet long?) stack of beef slices on a large skewer, suspended from the ceiling (where it continues to cook). To create a sandwich (or other menu item), the employee takes what appears to be a large (about 4 inches wide?) razor-like tool and shaves off meat for the sandwich. They were very good. (We ate at several other Dönners in Germany.) Most of the Dönners are run by individuals of Turkish ancestry.

As we were driving to Würzburg, I realized that registration for Apple's World Wide Developers' Conference would be that evening at 6 or 7 p.m. (Central European Summer Time). We had a few spare moments at just the right time (in the hotel), so I visited the WWDC site on my ChromeBook (I left my MacBook Air at home, not wanting to risk losing it). I immediately obtained a reservation. (WWDC sold out in about three minutes). Although the Internet connection failed as I was pushing the button to submit my credit card information, Apple treated it as a success. They emailed me, acknowledging that I had successfully registered, and sending a link for me to follow to complete the registration. Apple does, indeed, have the best customer service of any company I've dealt with.

On April 26 we left Würzburg (marker A on the map below) early, visiting Rothenburg (B) and Kattenhochstatt (C) on the way to Nuremberg (D).

Driving the Romantic Road from Würzburg, we reached Rothenburg before noon. It definitely met and exceeded our expectations!

From Rothenburg, we used John's Android's GPS to find tiny Kattenhochstatt where Barbara's great grandfather Schreiner was born. (The house is just across the street from the church.)

We rolled into Nuremberg at about 6:00 p.m. on April 26 (after visiting Rothenburg and Kattenhochstatt. We found a Best Western hotel near the Altstatt. After dinner, we went to see the movie "Oblivion" ... in English.

After a good night's rest, we visited the Deutsche Bahn Railroad Museum--several blocks from our hotel. Then we walked in the Altstadt, visiting the Nuremberg Castle (Burg), etc.

Note: It was probably on the drive from Nuremberg to Munich that we noticed that John's new VW GTI would go no faster than 202 kilometers/hour (about 125 mph)--likely due to a governor?. I think that's where we first encountered unlimited speed limits. (We also enountered them later, on our drive from Munich to Berlin and from Berlin back to Wiesbaden via Hamburg.) Brian's Guide to Getting around Germany has an informative article on the Autobahn and its traffic signs. The "End of all restrictions sign" and the per-lane speed limit signs were particularly interesting. (After being on the Autobahn, I hate American freeways--especially the separate HOV lanes with slow drivers!)

We arrived in Munich from Nuremberg at about 6:00 p.m. on April 27 and stayed in the Best Western near the Olympic Stadium.

In Munich we visited the Hugendubel bookstore in the Altstadt, watching the Glockenspiel on the plaza. We also visited the Residenz of Duke Leopold.

We stopped at Leipzig on our way to Berlin from Munich. We saw many bombed (or burned) out buildings. The one bright spot of the day was a visit to Thomaskirche, where Bach was organist, choirmaster and composer for 27 years.

Berlin was probably my favorite German city. (That's significant because Berlin wasn't in any of our tentative itineraries before travelling to Germany!) It was fun riding the S- and U-Bahn trains. We stayed at Hotel Carolinenhof on Landhausstraße and ate at the same Vietnamese restaurant for three evenings in a row. (I had Pho [which appeared as Fu and is apparently pronounced that way] each time. FWIW, I had no sushi or Japanese food the entire trip!)

During our first full day in Berlin we visited the National Museum's Gemäldegalerie. Barbara added two more Vermeer paintings ("The glass of wine" and "Woman with a pearl necklace") to the list of paintings she has seen in person.

We had our passports stamped at Checkpoint Charlie, visited the Computerspiele Museum, several Media Markt locations, a Hugendubel or two, and generally had fun, leaving the car in the hotel garage all three days.


Berlin to Wiesbaden (via Hamburg) May 3-4

We stopped in Hamburg for lunch on our way back to Wiesbaden from Berlin. It was a beautiful city--but we had no time to explore it further.