Christmas Recital at the Tabernacle in Salt Lake City

The photo below was taken on Christmas–25 December 2007–following a recital by my brother Walter (second from right) at the Tabernacle in Salt Lake City. Pictured are (left to right) Barbara, Weldon, Walter and John. (The photo was taken by Michelle Kogure, visiting from Hawaii.) 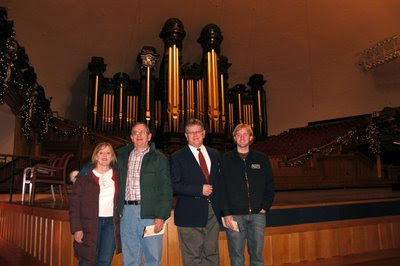 In 2007 we took a cruise on the Rhine and other rivers in the area of Frankfurt am Main (sometime referred to at "Mainhattan" because of its skyscrapers. The cruise embarked from the Frankfurt airport. We decided to spend a day or two in Manhattan (New York City) on our want to "Mainhattan"

Our hotel (the Red Roof Inn) was across the street from the Empire State Building, so we walked to  that building on our first evening in New York City.