On Thursday, July 26, Barbara and I flew to Japan's Kansai Airport via Los Angeles. Crossing the International Date Line, we arrived at about 6:00 p.m. The Iwaki family met our flight and drove us to their home in Kawanishi in northwestern Kansai.

On the way they stopped at a restaurant named Gyōza no Ōshō (餃子の王将), where Barbara and I had yakisoba. (It was delicious!) We met the father Masaaki, Yasuko his wife, daughter Emi, 17-year-old son Shō, and 14-year-old son Kei. The family was extremely gracious to us.

Suffering from jet lag, we went directly to sleep on futons in the living room.

After breakfast, Yasuko drove us to Osaka Castle, the Osaka Aquarium, and to the Okamachi Branch.


In the evening we went to a fireside at Okamachi Ward (in Osaka), where I showed slides of some pages in my web site. Then we returned to the Iwaki home in Kawanishi.

Nishikyōgoku, Kinkakuji, and an Openhouse, July 29


Yasuko drove us to Nishikyōgoku early to attend church. We were able to meet Nick there. Then she drove us to Kyoto to see Kinkakuji and several other places.

We returned to the Iwaki home and attended an openhouse for a multi-generational family that had built a new house where their old one had been (while living there the entire time). It was a very nick house!

Today was a busy day in Kyoto with the Iwakis. They drove us to visit:


We went to a traditional ryokan to sleep.

We were wide awake at 4:30 a.m. We phoned the hotel in Nagoya to make reservations for tomorrow night

The Iwakis met us again and took us to the following places:


We had dinner at Gustos, followed by a visit to English class. We slept at the Iwakis' home

Our next stop was Katsura Rikyu. (I had visited the villa during my 1968–71 stay in Japan.)

Daitoku-ji—"Temple of Great Virtue"—is a Buddhist temple that, one of fourteen autonomous branches of the Rinzai School of Japanese Zen. The complex covers 57 acres in Kyoto. We visited two sub-temples: Daisen-in and Zuiho-in.

Daisen-in (大仙院) is a sub-temple of Daitoku-ji, a temple of the Rinzai school of Zen in Buddhism, one of the five most important Zen temples of Kyoto.

The Zuihō-in (瑞峯院) monastery was founded by a Buddhist priest/warlord who later converted to Christianity.

We awoke early in Kawanishi. Yasuko drove us to Himeji to see the gardens and castle there.

Himeji Castle is purportedly the largest and only castle to have survived undamaged. (Other castles are reconstructions.)

Yasuko dropped us at Himeji Station. We had hoped to be able to use our JR [Japan Rail] Passes to ride all the way to Nagoya, but we had to pay to go to Sannomiya (Kobe), where we caught an express train to Kyoto. We met Nick in Kyoto, then the three of us (Barbara, Nick, and I) took the Hikari bullet train from Kyoto to Nagoya. Nick caught the subway to the mission home, and Barbara and I stayed overnight at the Nagoya Associa Hotel.


Visit to a Lighthouse, August 2

We left the hotel in Nagoya at about 9:00 a.m, took an express train to to Tōba (鳥羽), then a slower train to Ugata (鵜方), then a bus to the Daiōzaki Lighthouse (大王崎灯台).

We returned to the Nagoya Associa Hotel for the night.

At 8:00 a.m. Barbara and I left the Associa Nagoya Terminal Hotel and went to the Nagoya mission home. We met President Whitesides, then left for Tokyo with Nick on the Shinkansen, locating Ikebukuro, where the Sunshine City Prince Hotel is located. Our room wasn't ready, so we visited the Tokyo Temple. We met several Toyonaka and Okamachi members that had been to the fireside last Saturday. Then we headed back to Ikebukuro, had some katsu-curry, then to the hotel and bed.

Today we visited the Akihabara (electronics) district (geek heaven!) and the Ginza, mostly window shopping and tasting food. We ended up buying a Japanese computer keyboard, the Japanese version of Final Fantasy X, etc. We also went to Shinjuku and enjoyed the Kinokuni-ya Bookstore.

Back at the hotel, we looked out the window and saw the annual neighborhood Obon (お盆) festival taking place 20 stories below. Although we were tired, we went down the elevator to see the dancing firsthand. (The Obon festival honors one's ancestors.) It was taking place on the roof of a 3-story building right next to the Sunshine Hotel.

And then ... Barbara joined in. One lady gave Barbara a scarf, and another a fan. They pulled Barbara into the dance.
Some of the spectators came up to say "good-bye" to Barbara. Then, exhausted, we went back up to our hotel room on the 20th floor and went to bed.

The three of us attended church at the Tokyo English-speaking Ward. Then we took the Shinkansen to Nikkō (日光). The city of Nikko is at the entrance to Nikko National Park, most famous for Toshogu, Japan's most lavishly decorated shrine and the mausoleum of Tokugawa Ieyasu, the founder of the Tokugawa Shogunate. (Tokugawa died in 1616.)

At the end of the day we returned to our hotel in Sunshine City.


Here are a few things we saw in Nikko: 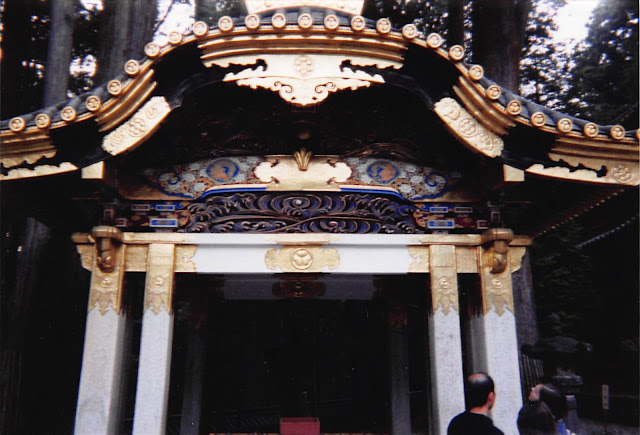 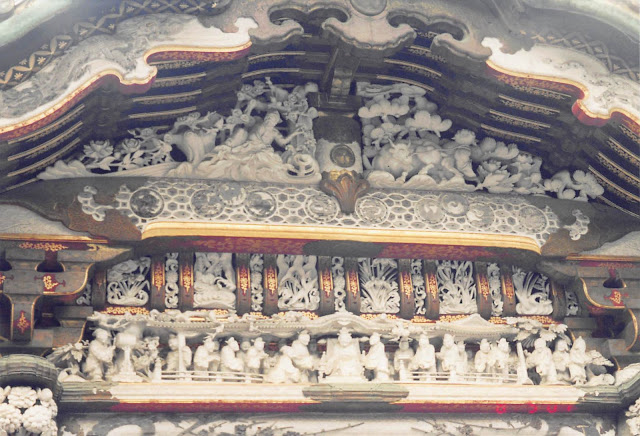 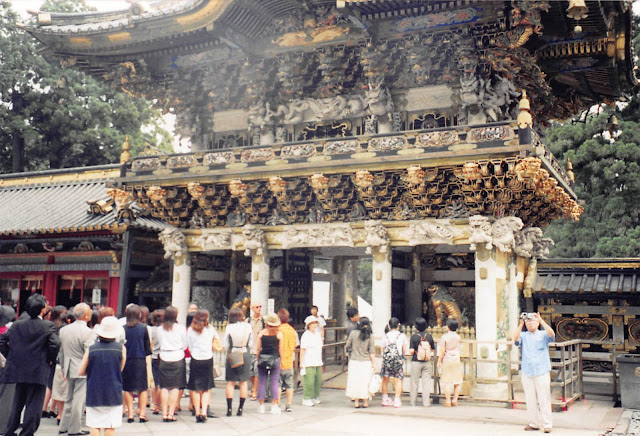 More Tokyo, then back to Nagoya, August 6

Today we checked out of the Sunshine City Prince Hotel, then (briefly leaving our suitcases at the hotel), visited the Maruzen Bookstore, ate at the Hard Rock Cafe, and visited a few more places in Sunshine City. One of my favorite places was the Hyaku-en (100 yen) Store—like America's dollar stores.

We caught a train to Tokyo Station, then the Shinkansen back to Nagoya.

We stayed at the Nagoya Associa Hotel one final night.

Today we took the Shinkansen from Nagoya tot he Shin-Osaka Station, then JR and Hankyū railroads to Okamachi to retrieve 7 suitcases that we needed to take to the U.S.

The three of us and the suitcases made for a very full taxi to Kansai Airport, where we checked our luggage, had lunch, then rode the train to the gate for JAL 60.

The flight left at 5:30 p.m., then—crossing the International Date Line and instantly gaining the 24 hours we had lost coming to Japan—landed in Los Angeles at about 11:00 a.m. the same day (6 1/2 hours before it left Japan). After going through immigration and customs, we waited for our flight home.

Who should we run into at LAX but our across-the-back-fence neighbors the Roberts! They flew home on the same flight we did!