The week before Thanksgiving 1987, IBM asked me to go to Fujisawa, Japan, to help them set up IDSS (Integrated Development Support System). Gary Doerge went with me. We flew Northwest Airlines from Minneapolis to Tokyo, leaving Saturday, December 5, at 6:35 a.m., and arriving at Narita Airport the next day. IBMers in Japan work very late—often until 9:00 or 10:00 pm. They arrive at work at precisely the same time every morning (likely because the subways are so punctual in Tokyo?). We returned to Minnesota on Saturday, December 19.

On Saturday, December 12, Gary and I met Minoru Kamada (whom I first met in Wakayama in late 1970). In Tokyo, we visited the Ginza, the Akihabara electronics district, and Shibuya-ku. At the end of the day we took the Shinkansen back to Fujisawa.


The next day we visited Kamakura, Japan, the site of a very large statue of Buddha. 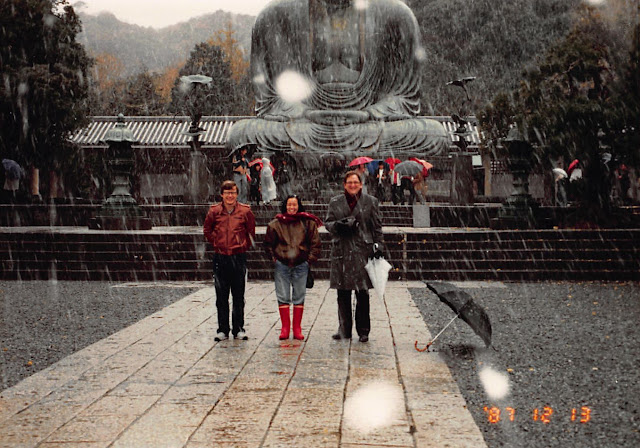 On Tuesday evening, December 15, Heisuke Wada (with whom I opened the first branch in Wakayama in October 1970) met me at Hotel Ocean Terrace in Fujisawa. We drove to Denny's for a meal, where I learned that he works for the Levi Strauss Co. in Japan, also that he was bishop of the Fujisawa Ward for 4 1/2 years. (He is currently the high priest group leader.) He then swung by the Fujisawa Ward chapel, and (finally) to his home to visit his family.